Does USC Have a Case for the National Championship? 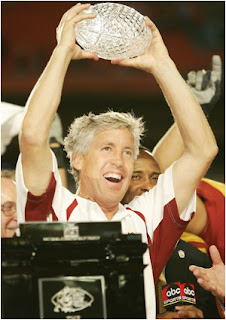 USC started the season with national title expectations but a major hiccup prevented them from reaching their true potential. But after thrashing Penn State in the Rose Bowl does USC have a case for the national championship? The answer is no.

First of all it really is USC's own fault they are not in this game. You cannot forget the fact that they lost to Oregon State. If they win that game and then they get snubbed they truly do have a case but the lost and you can't ignore that.

What USC really does have a case for is a playoff. Yet again its BCS bowl season and were discussing the flaws in the system but it is a team like this that reminds us why you need to have a playoff system. I mean saying that the Trojans and Texas do not make a legitimate case for the national championship is just crazy talk. With so many great programs it is just unrealistic to believe that only two teams deserve the right to play for the title.

I agree whole heartedly. The first big argument against a playoff was that college players cannot play that many games. I do not know about other states, but in Texas when a team reaches the state championship game they have 15 or 16 games. That argument died. Now the argument is that teams cannot travel that much. Just like in the NFL all the games could be scheduled at the higher seeded teams' home stadium & then the national title game could be at a neutral site.

I gave a post for a 12 team playoff on my site a month ago so I surely agree with you.

It would be awesome to get to see USC play again against someone like Texas or Oklahoma in the semi-finals of a playoff.