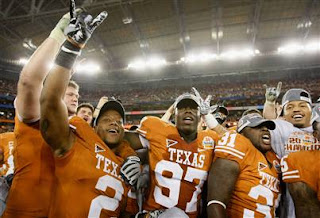 This time Texas was on the receiving end of some late game heroics. After having their title hopes ended by Michael Crabtree and Texas Tech two months ago the Longhorns returned the favor to Ohio State. The Buckeyes looked like they were going to end their BCS drought but Colt McCoy and Quan Crosby hooked up with 16 seconds to give the Longhorns the win.

Texas came in with a chip on their shoulder; they thought they should have been playing on Thursday night. Ohio State came in trying to garner respect for themselves and the Big 10 as a whole.

The first half was an exchange of field goals as both teams couldn't get their offense to click. Beanie Wells had a strong first half, picking up 117 total yards, but a concussion sidelined him for most of the second half, which really hurt the Buckeyes. The scoring took off in the second half as Texas put up two TDs in the third quarter. Ohio State responded with two scores of their own in the 4th, including a TD reception by Terrell Pryor. In the end, however, it was not enough as McCoy lead the Longhorns down the field, hitting Crosby, for the 26 yard winning TD.

Texas came into this game looking to convince voters that they deserved a share of the National Title. They fell short in that bid. Texas is a damn good football team but they needed to roll through Ohio State in order to get the voters to look their way. Their win just wasn't flashy enough; if anything USC or Utah might jump them.

On another note Ohio State should feel okay about this loss. Granted no one likes to lose but they played well and definitely gained some respect back for themselves. They hung with one of the best teams in the land on one of the biggest stages; something they haven't done in a three seasons. They also have a stud waiting in the wings named Terrell Pryor.
Posted by Joe S. at 7:41 AM