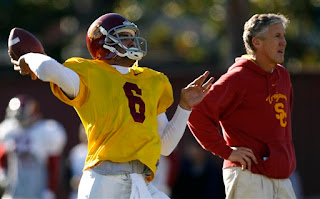 Well after being ridiculed for claiming that Penn State and the Big Ten did not belong in the Rose Bowl I was proven correct. Yet again USC just pummeled Penn State and demolished the Big 10 for the third year in a row.

At the start it looked like the Nittany Lions really came to play as they stayed with USC in the first quarter. Their defense kept the Trojans in check and their offense moved the ball well. The second quarter was another story. Penn State committed penalties, turned the ball over and just let USC blow the game wide open. Mark Sanchez tore apart the Nittany Lions for 413 passing yards, which is second most all time in the Rose Bowl, and 5 total TDs. The Trojans were also without two major weapons, FB Stanley Havili and RB Joe McKnight.

Penn State did make it interesting after being down 31-7 at half but in the end it was a very solid thrashing by the Trojans. What was supposed to be possibly the best game of the BCS season ended up being somewhat disappointing.

Oh come on now. I will give you that Penn State was beaten. I am a die hard PSU fan but the second half really doesn't mean ANYTHING. If the game was close they probably wouldn't have done what they did.

BUT you can't say the Big Ten doesn't belong in the Rose Bowl cause they can't beat USC. If you put ANY TEAM from ANY CONFERENCE in that game and they probably get beat badly by the best team in the country.

All this shows is how BADLY we need a playoff.