Oh Ya This Happened 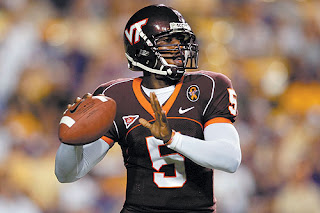 Amid the big Rose Bowl win for USC and the stunning upset for Utah the Orange Bowl was somewhat forgotten.

Frank Beamer's Hokies took on the Brian Kelly's surprise Cincinnati squad in what turned out to be a lackluster BCS matchup. Tyrod Taylor, the VT quarterback, who was originally redshirted this season was thrown back into the offense and helped propel them through the ACC championship and to a big Orange Bowl victory. Frank Beamer came under fire when East Carolina upset VT in the first week of the season but he got his team back on track and saved their season as well as what could have been his job.

Cincinnati came into this game hoping to get some respect back for the Big East but were only able muster up 7 points as they fell 20-7 to the Hokies. The Hokies picked off Cinci QB Tony Pike four times but it was VT's running back Darren Evans that stole the show with 153 yards rushing and a TD on 28 carries. This win for Viriginia Tech snapped the ACC's 8 game losing streak in the BCS.
Posted by Joe S. at 12:50 PM